My first[1] computer was a Packard Bell Legend 418CD, which my parents bought for me toward the end of my freshman year of high school (1995). I'd always been somewhat interested in and fascinated by computers, but it wasn't until my freshman year that I began to take a strong interest in them (mostly because one of my friends in high school, Aaron Mielke (man, I hope spelled that right) was into computers himself, but unlike me actually knew what he was doing and taught me a great deal about how they work). My Packard Bell, despite the company's general reputation for cheap/poor quality, was a fantastic system that served me well for many years. When purchased, it had the following specs: 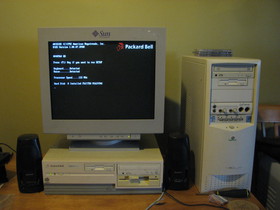 This was a pretty pimpin' system back in 1995. It came with Windows for Workgroups 3.11 and MS-DOS 6.2, and although Windows 95 had been released a couple months earlier, I was perfectly happy with 3.11 as I really didn't like the new interface in 95 at the time (in fact, I didn't upgrade to 95 until 1998, and even then only because Final Fantasy VII PC required it, and I really wanted to play Final Fantasy VII). Retrospectively, I'm still glad it came with 3.11 because it gave me the opportunity to learn a lot about DOS and pre-95 versions of Windows that I otherwise would've missed out on.

I was really into gaming at the time, and was able to play any game I wanted on it at the time and, after some upgrades, for years to come (the last major games I can remember playing on it were Half-life and Final Fantasy VII, which were certainly not lightweight games). It served as my primary (and only) computer until the summer of 1999, when it was replaced by my Gateway P500 (Pentium III 500). By that time, my Packard Bell had been upgraded numerous times to include:

I pretty much upgraded it as far as I possibly could, short of replacing the motherboard. After it was displaced by my Gateway in 1999, it still served a number of functions in the following years:

This box stayed on router/firewall firewall duty all the way until 2005 or 2006, when I replaced it with a Linksys WRT54G. Getting eleven years of productive use out of a computer is an awesome accomplishment, and I was actually rather sad when I shut the thing down for good a few years ago. I simply had no other use for it at the time, so into the closet it went.

Well, fast-forward to a couple weeks ago when I pulled it out along with a couple other old computers I'd acquired to scavenge for some parts for a project I was working on. Of the three computers, my Packard Bell was by far the best maintained, still in the best shape, and the only one that was still fully functional. When I powered it on it even booted up to OpenBSD, still ready for firewall duty after all these years. :-)

I was actually so proud of it, after I finished the particular project I was working on I decided to fully revive it once more as a DOS/Win 3.11 test/play box. Granted, it serves no real useful purpose, but at fifteen years old it's still doing everything I ask of it. The most recent set of changes and upgrades included:

At this point, the box is up and running better than ever. I've had a good time fixing it up again, and given the history involved I thought I'd share this experience with my readers. Hope you enjoyed.

Also, I have another, related retrolicious post coming soon, so keep an eye out for it.